How New England Brewing Came to Be!

Although the name "New England Brewing" has existed on the walls of many breweries in the Northeast for many years, the tale of this particular New England Brewing starts in Connecticut. It was in 2001 that the New England Brewing of South Norwalk, CT sadly had to close its doors. Then head brewer, Rob Leonard, took a long and knowledgeable look at the craft beer market around him. And upon seeing that a nation wide ground-surge in small breweries was just beginning (along with the insight that he had no, discernable job skills other than brewing) Rob purchased the company name; lock, stock, and... nevermind. 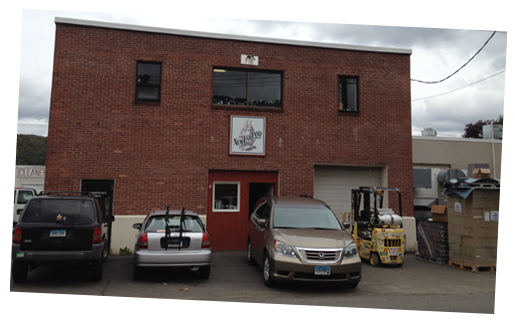 A lease was signed for a building on Selden Street in Woodbridge, Connecticut in the Fall of 2002. A few months later in June of the following year a grand "tap party" was held at the first bar to ever purchase an New England Brewing keg (Delaney’s in New Haven. RIP). This was on June 4, 2003, the birthday of New England Brewing (Woo!)! Pints were raised in celebration... by the seven or eight people who happened to come by. And then it was back to the work at the brewery.


Early on it was decided that New England Brewing beers would be available in cans. And that’s where a lot of the work came in. Besides brewing the beer, canning the beer would be difficult on a few levels. First would be the task of changing a mindset that said “only bad, old man beer comes in cans”. And the other chore would be to put the fresh beer into a can, filling the cans by hand two at a time, putting the lid on the can and sealing it one can at a time, then putting a six-pack ring on a half-dozen cans, then doing that four times to get a case, then to do multiple hundreds of cases to meet the growing demand. Yeah. Labor intensive.

The Selden Street location was the short-term home to New England Brewing’s first brewery dog, Gordy; a black Lab with a less than pleasant demeanor. 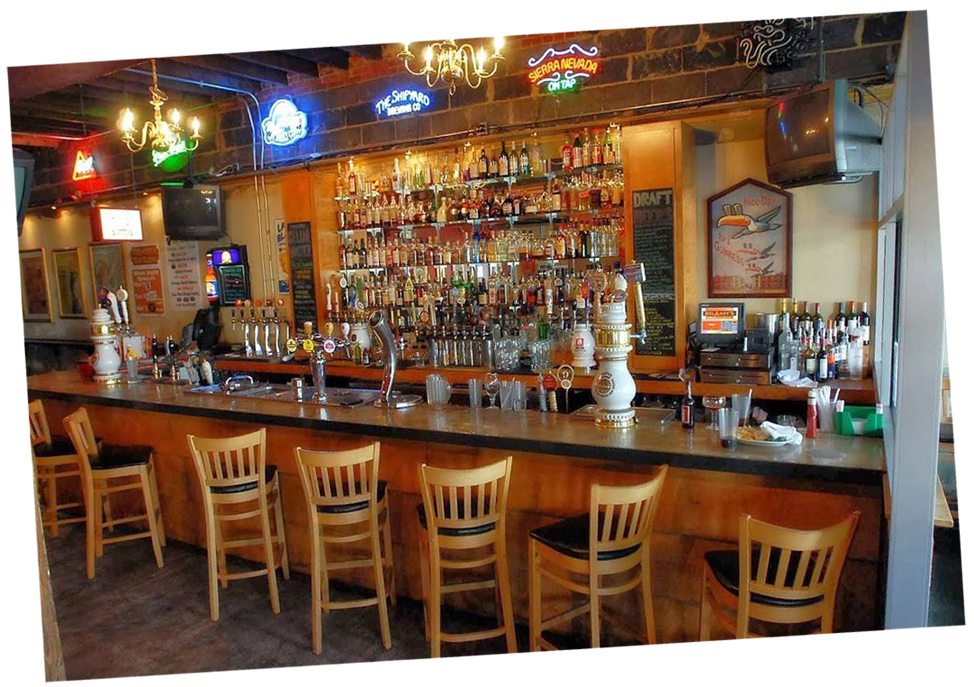 Kettles continued boiling and the word slowly got out that there was a brewery in the New Haven area again. As more and more people sampled the two beers that New England Brewing offered (Atlantic Amber and Elm City Lager) and as the beer world started to change, a wider variety of beers needed to pour out of Selden Street. Arriving in 2006 to meet the thirsty folks were Sea Hag IPA and Imperial Stout Trooper. This arrival happened to coincide with the recent passing of the Growler Law in Connecticut, allowing breweries to sell their beer in jugs. So, a makeshift bar and tap system sprouted up in the brewery and people started to knock on the door wanting to fill their growlers with and take home growlers of New England Brewing love.

While at Selden Street, a new brewery dog replaced Gordy. Another black Lab, this one named Eli, sauntered in and hung out for a while. He was ridiculously relaxed and always looked guilty.

The cement block walls of Selden Street soon became too confining as new and larger fermentation tanks, an automatic canning machine (No more two-at-a-time, 8 hour, fill-by-hand marathon sessions!), and more ingredients and cans filled the converted garage to it’s capacity. When more space is needed, a move is required. So in 2013, New England Brewing packed up it’s gear and moved…..across the street….literally.

Settling into the 175 Amity Road address took a little time. The front area of the new home was gutted and remodeled to make room for a real, live, tasting room/growler station. Now there was ample space for folks to come in, grab a couple of samples of what was on tap, and pick up some growlers to go. An actual staff appeared over time and a few more hands joined in the brew house and on the administrative end as well.

More beers were introduced from this locale like Coriolis, the dozens of beers in the Fat 10-er series, Locust Reign DIPA, New Hay IPA, Coconut Joy Porter, and Kewl Beans Coffee Oatmeal Stout- just to name a bunch.“These beers were obviously increasing the brewery’s output. Add that to an increasing demand for Sea Hag IPA and the exact amount of beer being brewed was accurately measured as "a whole lot".

The current Amity Road location is where the third New England Brewing dog resides. A German Sheppard named “Mosely”, he has a knack for sounding ferocious but being afraid of almost everything.

The year of 2016 is a solid year of acquisitions for the brewery.

Starting in 2016, there is the first large upgrading of our brew house; increasing the number of fermentation tanks and adding 60 barrel tanks. Also, doubling the size of our brew system (the old 15 barrel kettles are bumped up to 30’s.) allowing us to chase the always increasing, public demand for NEB beers. We also score two 60 barrel bright tanks (for storage and carbonation) filling our shrinking brew house with lots and lots of pretty, shiny stuff.

NEBCo. acquires Marty Juliano as the Director of Business Development and John Dieli as Director of Operations in 2016 in an off-season trade for two top-round draft picks, and a couple of breakfast sandwiches.

Pouring sample tastes of our beers on-tap is not a thing! We have the licensing to sell full-sized pours! Pints, 12-ounce snifters, and 7 oz. “short pours” quickly pass over the bar. So sit…relax…enjoy a grown-up sized pour.

And we sort of book-end 2016 with the entrapment of first Jeff Koebbe and then Greg Radawich in the NEB brewing web; forcing them and an on-point team of maniacs to make vast amounts of Sea Hag, as well as numerous other, delicious beers over time.

"What other kinds of beers," you ask?

Well, some of the beers the team is starting production on in 2016 are:

And with all that happening, the canning machine is geared up to a super-caffeinated speed and Fuzzy Baby Ducks IPA is being put in cans for the first time. 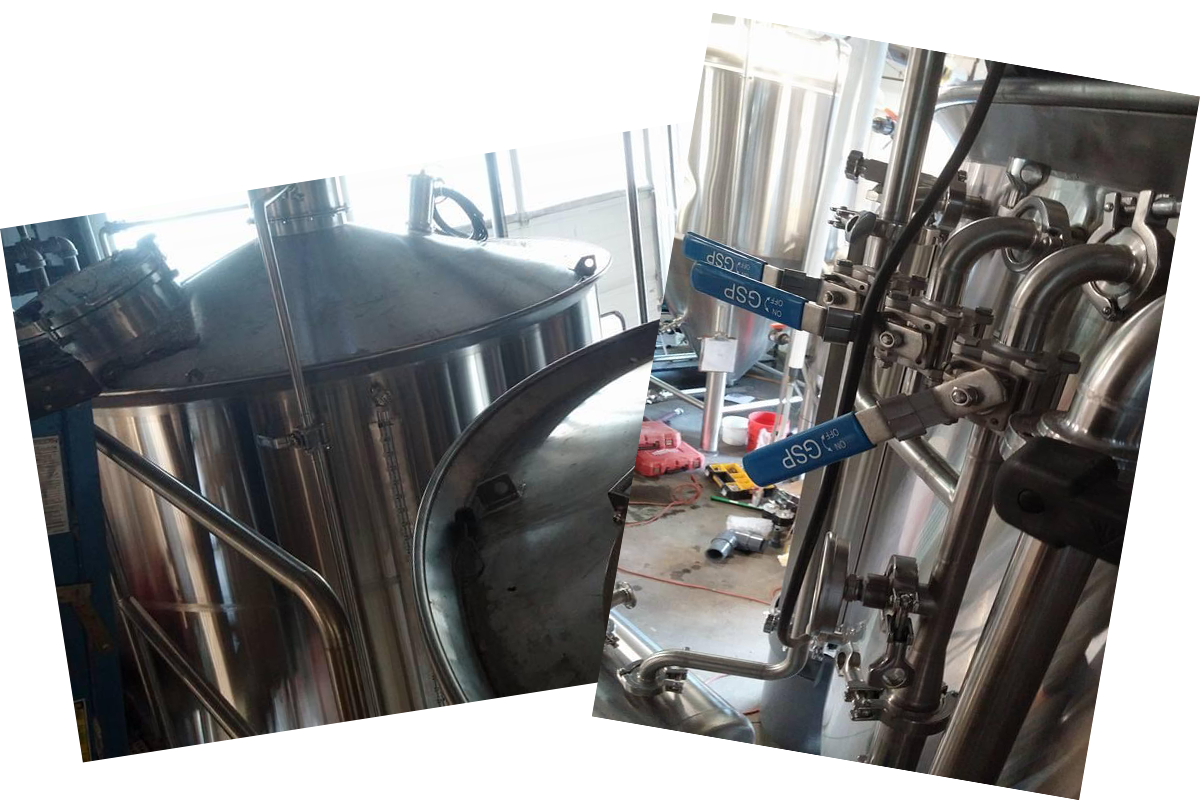 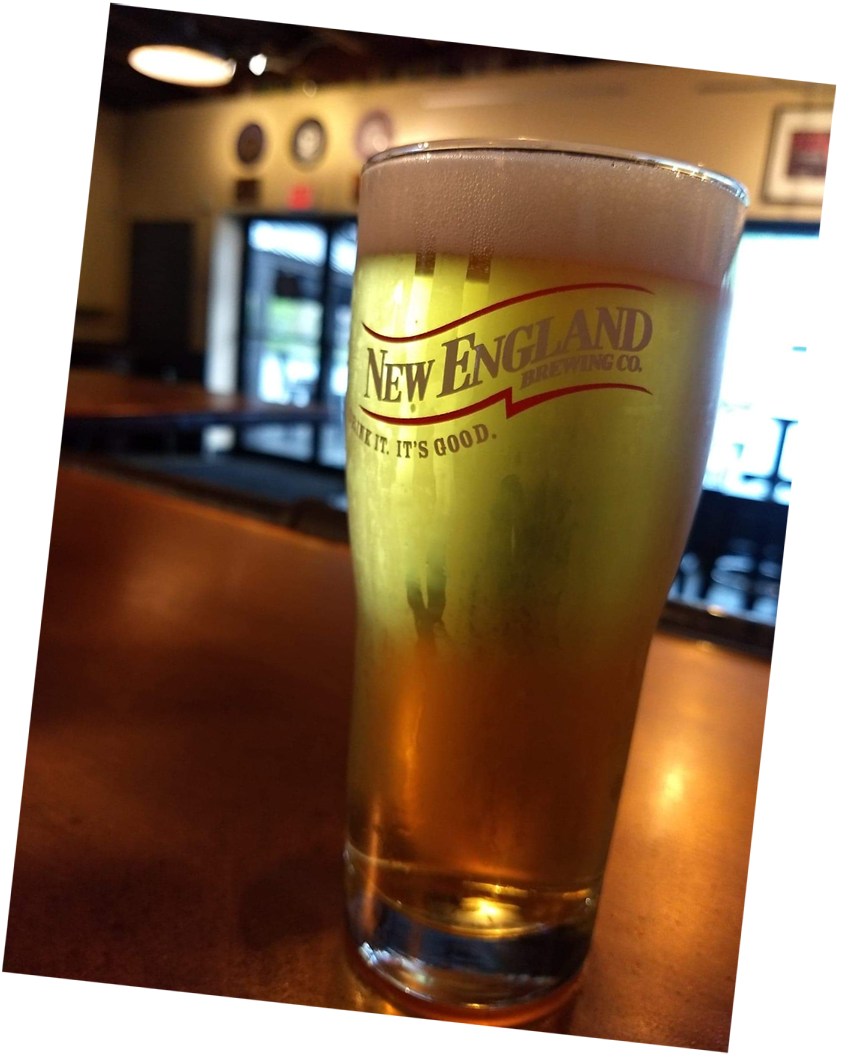 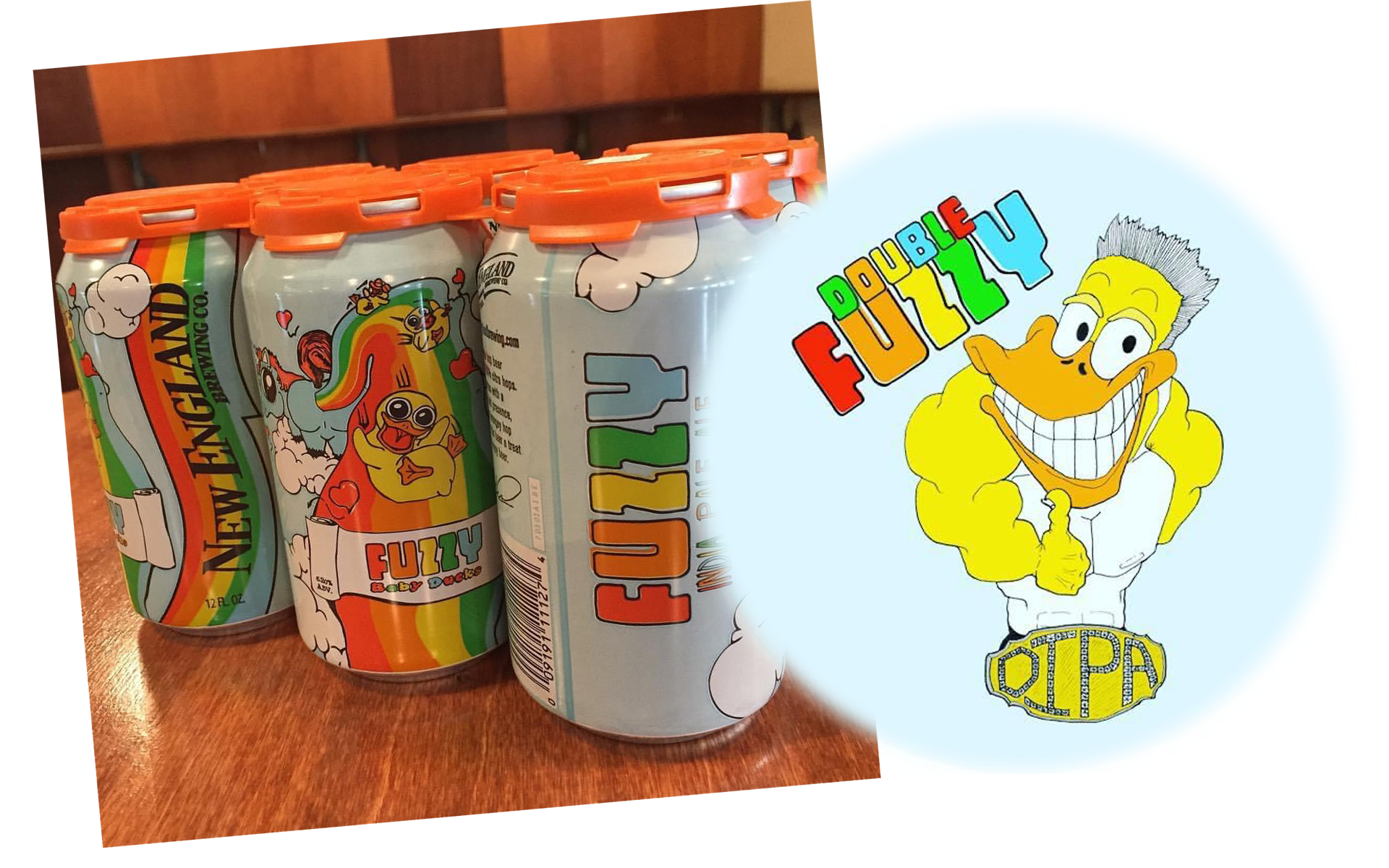 Two thousand seventeen sees the introduction of the rotating hop series Spin Cycle series (or a spinning cycle of beers! Get it? Spin? Like cyclical? It spins? Hold on. We’ll draw a picture.).

The year sees growth on all production levels (yeah,…including Sea Hag demand). And in the continuing growth, more beers are introduced to the thirsty, tasting room patrons.

We’re looking at you, Peach Fuzz, Track Suit, and Mangostein.

The space limit of 175 Amity Road is reaching critical mass. Owner Rob, other directors, and the brewers are sauntering through the brew house to get a first-hand assessment of the spatial situation.

the following is an assumed conversation

“So. Do you really think we’ve filled up the space?”
“Yes. I believe we have.”
“What if we move these tanks over a bit and spin that one a little and push those over a bit and move that one tank a foot over?”
“Yeah. Hmmm. What if we do that?”


And that’s exactly how you get two more, 60 barrel fermentation tanks into your already cramped brew house, initiating the last possible expansion.

Expansion is happening into the land of sour beers with the introduction of “Acrimony”, the first brew in our Acrimonious, Golden Sour series. 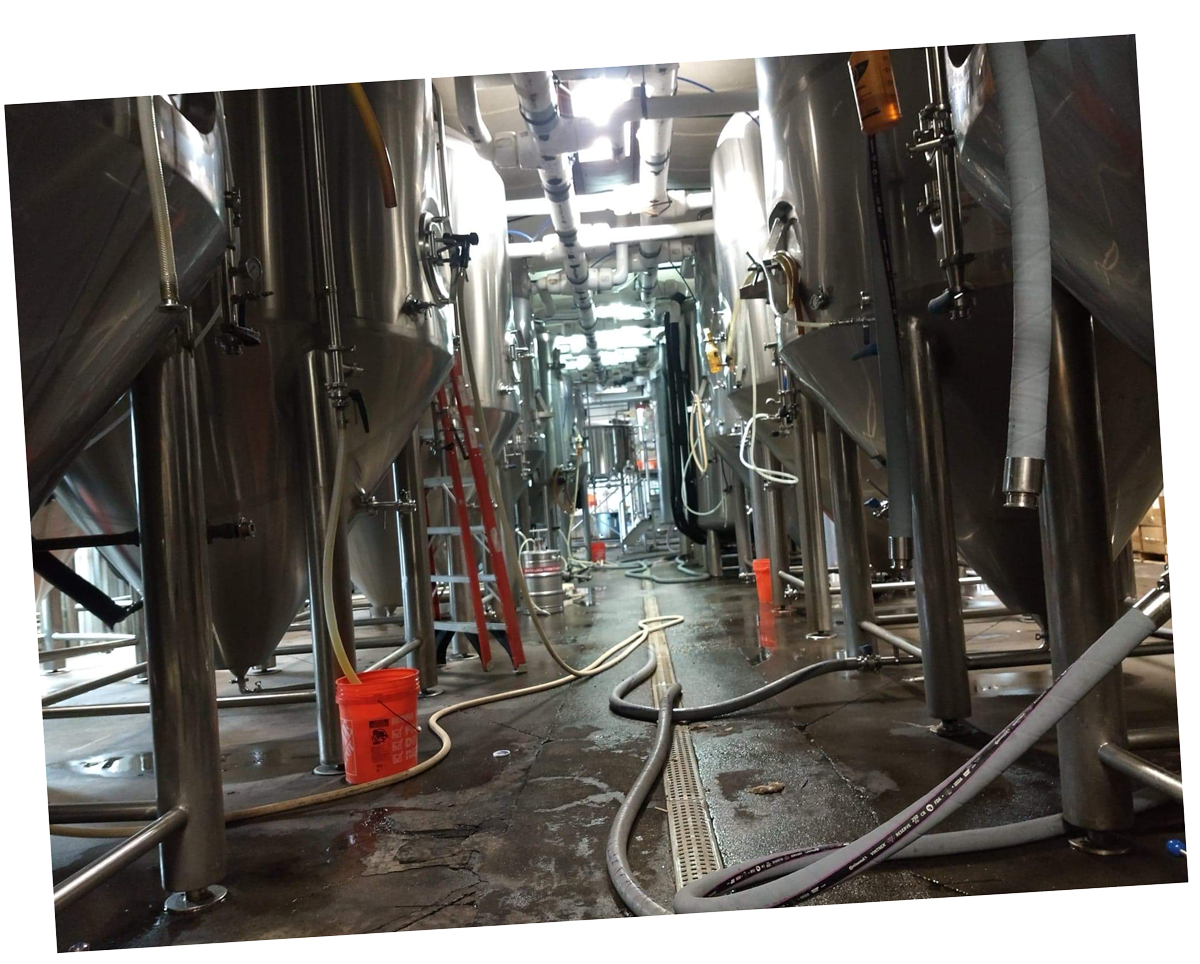 One of the core elements of the New England Brewing ethos is doing what we love. And we absolutely love making and turning people on to different styles of beer. Praise be to the year 2019 for letting us demonstrate this more with our newly acquired, 3.5 barrel pilot system!

This smaller system let’s the brew wizards concoct lots of different beers like a Saison or a Dark Mild or a Vienna Lager or an Extra Special Bitter or a Red Ale or a Smoked Brown or yeah, a whole bunch of Pales and IPA’s.

NEBCo. scores Jamal Robinson as the Director of Sales and Marketing, saving him from a life of cage fighting in the streets of Okinawa. And soon the “little brewery that could” finds itself with an extended sales team!….of two!

Still more Sea Hag is being produced as the demand increases, there are a couple variants of the Imperial Stout Trooper brewing in the tanks, Raising Helles lager is introduced, and the recipe for the fourteenth beer in our Spin Cycle series gets it’s own identity and it’s own can. That is Attack Of The Duck: Triple Fuzzy IPA, the Triple IPA version of our mildly popular Fuzzy Baby Ducks IPA. 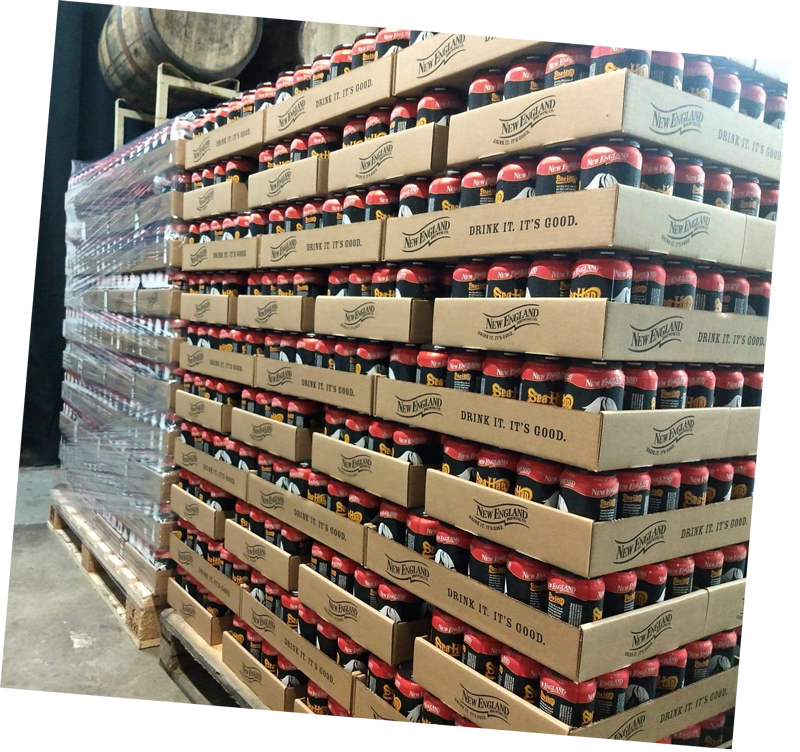 Besides time-honored IPA’s and Double IPA’s, sours are brewing, dark and malty ales are bubbling away in the fermenters, there are more faces joining the NEBCo. gaggle, there’s a few more barrels aging in the back, and the amount of beer brewed is hovering around the 20-thousand barrels a year mark (a bit of growth from the 500 barrels made back in ’03, huh?).

175 Amity Road still is the home of NEBCo. German Shepherd Mosely and he still is on an extended hiatus from the tasting room for “re-education” and to “learn how to play with others”. But he has help at school with his new sister Zuzu, a spunky, not so little, Rottweiler.